A common procedure used to increase the signal to noise ratio ("S/N") of images is to combine them in software by mathematically merging the pixel values of the individual images. Image combining is sometimes termed "stacking". Increasing the signal to noise ratio improves the detection of weak features and shows fainter objects, and it improves the significance of any measured quantity like magnitude, surface brightness, edge sharpness, centroid position, etc. Image combining can also remove deviant pixels that do not differ from one image to another simply because of random noise. A deviant pixel might also be caused by a cosmic ray hit or radioactive decay, as CCD's are extremely sensitive to such radiation events.

Various methods are available for combining images to blend the goals of increasing the signal to noise ratio and removing non-repeating artifacts. In the limiting case of best performance, combining can improve the S/N by the square root of the number of images combined. For example, combining 16 images of the same field of view can increase the S/N as much as 4 times. Removing artifacts such as cosmic rays reduces the theoretical gain to somewhat less than √n. Balancing the objectives of increased S/N and reduced artifacts involves choosing from a variety of different combining methods. This Tech Note considers two commonly used methods, the Mean and the Median. It also describes the additional effect on the ultimate S/N that results from combining images and saving the result using integer type pixels and real type pixels.

A set of 8 images was obtained from a CCD camera. The images were then combined using the Mean and Median methods. The processing was then re-done after changing the images from integer to real type pixels. All processing was done

using Mira. These images were acquired using a 12 bit CCD camera, but the same general result applies to any other bit depth such as 16 bits per pixel. The pictures show a magnified views of the combined images for the 3 of the 4 results. On each close-up  is written the standard deviation "sigma", the combining method, and the pixel data type. All values are reported in units of DN ("Digital Number", also known as ADU or Counts). Cases (a) and (b) compare the mean and median for integer type pixels. Case (c) shows the mean combination with the result saved as real type pixels. The missing case of median combining and real pixels is considered further below. Progressing from left to right shows a progressive improvement in the signal to noise ratio of the combined images.

For all cases, the images were normalized as part of the combining procedure in order to make the overall image brightness similar before pixels were combined. This makes the principle difference between the brightness of the combined images attributable to random noise, allowing the combining process to do the proper statistical thing by "beating down the noise". The noise value, or "sigma" (standard deviation), was measured inside a rectangular cursor box placed in a clear area of the image background. This area was chosen after greatly stretching the contrast to make sure no objects or bad pixels were included in the measuring box. The noise value listed on each image quantifies the visual impression that image (c) is the cleanest--it has the highest signal to noise ratio. This image was mean combined and stored in real pixel format. The reason the saved image format matters is that saving to an integer image involves truncating  the combined value to the nearest integer value. This imparts an additional noise value of 1/sqrt(12) counts to each pixel (for a discussion of quantization noise, or truncation noise and its effects on CCD photometry, see Newberry, M. V., 1991, Pub Astr. Soc. Pacific., vol. 103, p.122 ).

The pictures below compare the mean and median method using only real type pixels for the saved images. Note that a slightly different sample region was used for the statistics in this set, so the sigma for the "mean, real" image below is not exactly the same as for the "mean, real" image above. Again, the mean combining gives the lower noise result. 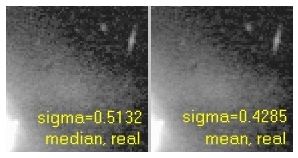 This is clearly shown by the two small galaxies located near the top right corner of the images.

Median combining a given number of images increases the S/N about 80% as much as mean combining the same number of frames. This loss of potential gains in S/N results from the fact that the median continues to select a value that is a member of the set of input pixel values, no matter how many frames are combined. Both combining methods also have a "hard" limit that occurs when adding more frames stops changing the combined pixel value by 1 digital number (count). This limit is overcome if the pixel type is changed from integer to real so that fractional pixel values can be represented at all stages of image processing, including the saved result. This latter effect is shown by images (b) and (c) in the uppermost pictures. Median combining can give a S/N similar to mean combining if 57% more images are used. The origin of this number is that the variance of a median-combined sample is pi/2 (= 1.57) times higher than for a mean-combined sample. The standard deviation is the square root of the variance, or 1.25 times higher. The noise resulting from mean-combining is then 1/1.25 as large, or 80%, of that achieved by median-combining.